UPDATE: The Healthy NewsWorks film “How We Heal” has been named Best Children’s Media winner during the 2022 San Diego International Kids’ Film Festival. The winners were announced at the end of the festival recently. Films from Hungary, Norway, South Korea, Taiwan, across the United States, and other countries were also among the winners.

(Original story, posted October 18, 2022) “How We Heal,” a film by Healthy NewsWorks student journalists, has been named an official selection of the 2022 San Diego International Kids’ Film Festival. 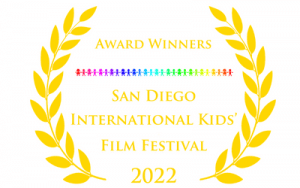 The 22-minute film features student journalists speaking with therapists, educators, scientists, artists, athletes, and others about healing. It was completed during the 2021-22 school year under the direction of filmmaker Rodney Whittenberg, who partnered with Healthy NewsWorks on the project.

“The kids did an amazing job, from interviewing to being on camera,” said Rodney, owner of MelodyVision in Plymouth Meeting, Pa. “It’s great to see a group of people all the way across the country agree that people should see this.”

Rodney said the students who worked on the film “were smart, fun, funny, creative, and curious—in a word, awesome!” As for the film, “I believed it was good,” he said. “But you never really know if it’s working until others see it.

“How We Heal” is among more than 145 projects from more than 30 countries selected by the San Diego International Kids’ Film Festival. The festival promotes educational entertainment for children and youth and supports films it considers innovative from around the world. The festival is scheduled Oct. 28- 30 in Carlsbad, Calif.

“We’re absolutely delighted that our film was selected by the San Diego International Kids’ Film Festival,” said Marian Uhlman, Healthy NewsWorks executive director. “This was an important project for our program that gave our students an exciting way to share information from experts about how people can move ahead during challenging times.”


The film premiered during the Healthy NewsWorks Film and Book Fest in May 2022. If you’d like to arrange a screening for your students, please contact Healthy NewsWorks program manager Mia Blitstein at mblitstein@healthynewsworks.org.