By Kids For Kids

Back to Top Stories 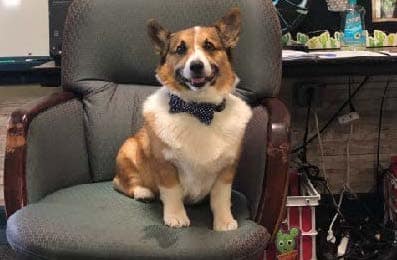 By Catholic Partnership Schools Healthy Courier staff | Many schools have a counselor, a social worker, or a school psychologist to support their students, but St. Joseph Pro-Cathedral school has someone else: a dog. Cody, a Pembroke Welsh corgi, has a job at school. His job is to provide emotional support to anybody in school having a bad day. He comes to school with Mrs. Bergen, a third grade teacher at St. Joseph.

Cody has been doing this job for two years, starting with the pandemic. Kids were having trouble with stress and coping with the pandemic. Mrs. Bergen said, “Not all dogs have the personality to be in school. It takes a calm dog and lots of training.” That’s why she and Principal Orosz thought Cody would do a good job at school.

St. Joseph had been visited by a businessman, Vernon Hill, who brings his dog everywhere with him. He helped St. Joseph get the money to get Cody certified as an ambassador dog at school.

Cody is available to all students and staff. If you are having a bad day, you can come down to Mrs. Bergen’s room. She said touching a dog can help you feel better.

Johns Hopkins Medicine explains on its website, “Research has shown that simply petting a dog lowers the stress hormone cortisol, while the social interaction between people and their dogs actually increases levels of the feel-good hormone oxytocin.” Hormones are chemical messengers in the body that can affect it in many ways, including a person’s mood.

On the first day of school, Mrs. Bergen lets the students get all of their excitement out of the way, and now Cody is just like another student in the class. These students don’t get distracted having a dog in their classroom, she said.

Mrs. Bergen explained that Cody has two collars. The bow tie collar is his working collar. He knows that when he has it on, she said, he is going to school to work with the kids. His other collar, which he wears at home, “lets him know that he’s off duty and can relax and play.”

He likes to lie around and sleep in the classroom. If students go to the rug for reading, he gets up and sits in the middle of the circle. If a kid is upset, Cody gravitates toward that student to make him feel better.

In the classroom, it’s very unusual for him to bark, and he only does it when there’s a sound he doesn’t know. During instructional time, he sits on a stool next to Mrs. Bergen’s desk and watches the kids from there.

During the first fire drill, Mrs. Bergen had to calm him down. “Cody was a little nervous due to the loud sound. The next time he wasn’t anxious at all,” Mrs. Bergen said. Now he knows to walk the kids outside during a fire drill.

At home, Mrs. Bergen first met Cody because she was fostering him through a rescue. She was training him to be somebody else’s pet. Her job was to make sure he was calm and well-behaved. Her family fell in love with him and they adopted him.

“He is adventurous,” said Mrs. Bergen.

Cody does tricks, too. He plays dead, sits, and rolls over. He also responds to the command, “Legs!” by standing between Mrs. Bergen’s legs so that if she feels that he is in danger, she can keep him safe.

His favorite toy is a bunny. It was a gift from one of Mrs. Bergen’s students.