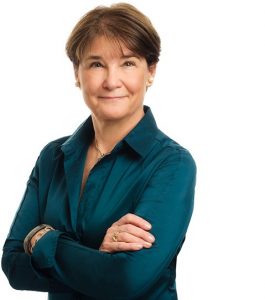 June 2018…Healthy NewsWorks is pleased to announce that Amy Ginensky will become president of its board of directors in July 2018. She will succeed Amy Krulik, who has helped guide Healthy NewsWorks since its founding in 2003 and led its transition to independent nonprofit status earlier this year. Ms. Krulik has served on its board since 2010.

The transition will take place as the new fiscal year begins for the student media program, which operated in 14 high-needs elementary and middle schools in Philadelphia and Norristown during the 2017-18 school year. Healthy NewsWorks teaches students basic journalism skills so they can produce newspapers, books, and digital media about health, nutrition, fitness, and safety issues. By doing so, these students learn to distinguish facts from fiction, interview experts and other adults, and improve their oral and written communication skills.

“We are deeply grateful to Amy Krulik, who has generously shared her wisdom, her work ethic, and her fabulous sense of humor with Healthy NewsWorks since its earliest days and has helped us expand and evolve in many important ways,” said Healthy NewsWorks Executive Director Marian Uhlman. “At the same time, we are very excited that Amy Ginensky has agreed to be our new leader as we focus on helping more children learn about and communicate accurate and relevant health information to their school peers and the broader community.”

Ms. Ginensky is with the Philadelphia law firm Pepper Hamilton LLP, where she chairs its Media and Communications and First Amendment practices, and is a past chair of its Commercial Litigation Practice Group. She is a Fellow of the American College of Trial Lawyers. She is also past president of the Philadelphia Bar Foundation and a current member of its executive committee. She earned her law degree at the University of Virginia. She has been on the Healthy NewsWorks board since 2016.

“I’m a big believer in the Healthy NewsWorks approach to fact-based learning about healthy eating and exercise, stress reduction, conflict resolution, and a host of other topics,” Ms. Ginensky said. “I look forward to working with Marian and the board and helping the program build on the incredibly successful record it built during Amy Krulik’s tenure.”

Ms. Krulik became CEO of the Kaiserman Jewish Community Center in Wynnewood, Pa., in 2017. Previously she had served as the executive director of the Jewish Relief Agency, one of the largest direct service food pantries in the Philadelphia region.

Ms. Uhlman cofounded Healthy NewsWorks at a school in Upper Darby, Pa., in 2003 and began its expansion in 2006. In early March, the program graduated from the New Beginnings Nonprofit Incubator at Resources for Human Development, which had been its fiscal sponsor since 2010.

Healthy NewsWorks worked with more than 1,000 students during 2017-18, including those in its core newspaper program for grades 3-8, a pilot Hearty Kids program for K-2 students focused on heart health, and lessons for other students throughout the schools on topics ranging from nutrition to web research. In May, the program published its seventh book, Leading Healthy Change In Our Communities 2018.