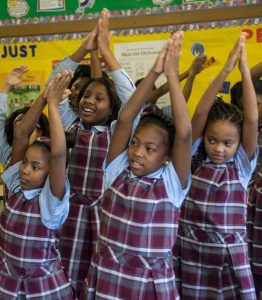 Student reporters try some yoga poses before the interview.

December 2017…The fourth grade health journalists started with the chair posture and finished with the tree pose. While many of them had tried yoga before, this was the first time the students had reported on the practice for an article that will appear in their school newspaper, St. Raymond of Penafort Healthy Outlook.

It was also their first formal press conference. They interviewed Erin Connolly, a yoga instructor who is also a manager at United Way of Greater Philadelphia and Southern New Jersey. After the reporters overcame their initial jitters, they peppered her with such follow-up questions as “what gives you stress?” and “how do you deal with it?”

“The reporters were outstanding in their questioning and presented themselves with exemplary attention to detail and critical thought, wise beyond their years!” Ms. Connolly said. “You would never know this was their first time conducting such an interview. I felt like I was in an ‘official press room.’ I look forward to seeing the completed article and hope other professionals have the opportunity to participate in such a unique and amazing experience.”

To prepare for the interview, the reporters learned about yoga and its positive role in reducing stress. The reporters had already researched the link between stress and risk factors for heart disease. Heart health will be a major theme this year in the Healthy Outlook and the other school newspapers in the Healthy NewsWorks network.

“The students were in awe of every question answered, every technique to reduce stress, and eager to get into every pose,” said Dana DiPasquale, a fourth grade teacher who is the faculty advisor for the Healthy Outlook. “It was a wonderful class for them to have and I know they will carry what they have learned into their own lives.”

St. Raymond of Penafort Catholic School is an Independence Mission School in Philadelphia.