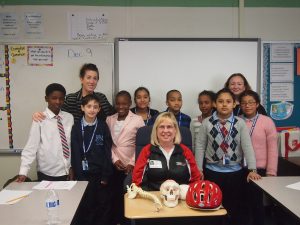 August 2017 … The importance of using bike helmets and some of the ways people can spot and prevent concussions were among the topics when a group of fifth grade reporters recently interviewed Cathy Markey.

“I’m always interested in young people who want to learn more about different health topics,” said Ms. Markey, trauma education and outreach coordinator at Einstein Medical Center Philadelphia. “The program I’m in serves the community, so I wanted the student reporters to know about it as well.”

Ms. Markey is director of the hospital’s ThinkFirst Injury Prevention Program, a national organization that educates people on ways to reduce the possibility of injury—especially those at high risk, such as children, teens and young adults.

She was interviewed by student reporters from the Eisenhower Healthy Panther at Eisenhower Science and Technology Leadership Academy in Norristown, Pa. Their article is one of 12 health leader profiles published in Leading Healthy Change In Our Communities 2017, the sixth book in a Healthy NewsWorks series on individuals who are working to make the community healthier and safer.

Ms. Markey said she felt honored to be asked to participate in the book. Her selection as a 2017 health leader was her introduction to Healthy NewsWorks, which during the 2016-17 school year worked with some 400 students in 15 schools in the Philadelphia area and distributed health-focused school newspapers to more than 6,000 students in those schools.

“I had not heard of Healthy NewsWorks before they asked me to do the interview,” she said. “I was not aware of how many people it actually reaches.”

Looking back on the experience, Ms. Markey said she sees the value of the Healthy NewsWorks program and the interviews with health leaders. “I’ve learned that it’s very important that young people be involved in the process of community, learning more about work-life skills such as interviewing,” she said. “I think it’s confidence-building for young people.”

Ms. Markey said she hopes to remain involved with the program. “I will spread information by word of mouth and encourage anybody to participate, because I think it’s a great experience.”