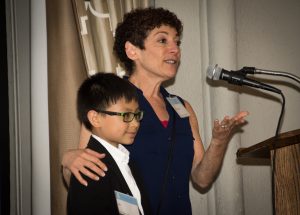 June 2017 … Working on his school’s health newspaper helped Ian Kaplan “be a curious and more talkative—in a good way—person,” the Highland Park Elementary School student told a crowd of some 200 community members at a Healthy NewsWorks celebration on May 31.

“Being a reporter was one of the best experiences I ever had,” he said.

The fourth grader spoke during the book-signing celebration marking the publication of Leading Healthy Change In Our Communities 2017, the sixth in a series of Healthy NewsWorks books on leaders who are making the Philadelphia region healthier.

Siobhan Reardon, president and director of the Free Library of Philadelphia, who was a 2013 health leader herself, delivered the keynote remarks.

The book includes profiles of a dozen leaders, 10 of whom were on hand to sign copies of the books. They were joined by 19 of the more than 110 student authors who helped produce the book, as members of the community asked questions and learned about the book and the Healthy NewsWorks program.

Several other leaders honored in past years also attended, including three whose accomplishments since their original recognition are featured in the 2017 book.

Copies of the book will be distributed in schools and other community venues in the coming months.

Dean Millard, an eighth grader at East Norriton Middle School, reflected on the many health leaders he had helped interview during seven years on the staffs of Healthy NewsWorks newspapers at two schools. “In these interviews, I have learned about their lives, the positive work that they contribute to the community, and many other things,” he said.

Victoria Strickland, a classroom teacher completing her seventh year as editor of the East Norriton Bulldog Bulletin, spoke of how she enjoys watching student reporters “get excited about ideas, jumping at the chance to do research, and head out around the school to conduct interviews.”