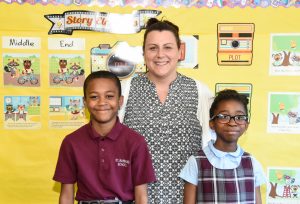 May 2017…The role shift from teacher to teacher-editor can be eye-opening. That was the case in January for Dana DiPasquale, the fourth-grade teacher at St. Raymond of Penafort Catholic School, a member of the Independence Mission Schools network.

Her fourth grade class became the reporters for the St. Raymond Healthy Outlook for the spring semester. The fifth graders had that job in the fall.

“In the beginning, I just thought it was just about classroom management … and an opportunity for the students to write a newspaper,” Ms. DiPasquale said.

She quickly immersed herself in her new editor role. “I’m definitely not one of those teachers who minds switching up,” she said, referring to her ease at scheduling around press conferences or nutrition activities. “I go with the flow of it and I embrace the fact that they all get to do something fun.”

When she received and read her students’ first article, Ms. DiPasquale recalled breaking down into tears.

“I was just super proud of them,” she said. “They’re more independent with [the newspaper] and they’re definitely stepping up.  … In turn, it’s given me a better idea of what they can do without the ropes.”

Looking back, Ms. DiPasquale only wishes her students could have been involved for the full year rather than starting at midyear. She is also positive about the place of Healthy NewsWorks in the school moving forward.

“I absolutely think that it should be implemented into more schools. I just feel like it’s a really good program to have for any kid because they should learn these skills and I don’t think regular curriculum teaches it,” she said.