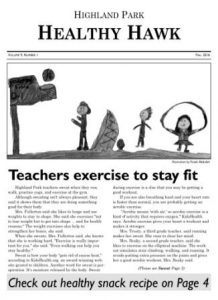 In 2014, Mr. Bucolo’s first year at Highland Park Elementary School in Upper Darby, “there was another teacher who was highly involved in Healthy NewsWorks and they let me know about a poster contest,” he explained.

“I first saw that our school was doing some journalism with the kids going around the school who were interviewing teachers,” he said. “I thought it was an interesting way to get them involved in journalism.”

He helps his students draw illustrations for the paper. “My main expectation is that these students bring their own voice into their work in the classroom,” Mr. Bucolo said. While he tries to teach good design skills, his main goal is for students to make illustrations that “send the message across but in their own unique way.”

These illustrations should “tie into what the article is going to be about,” he said. “So they look at [their work] almost like a professional would. They use the different designs and principles that we talk about in class and are able to make something in their own style.”

Each week, Mr. Bucolo teaches about 780 Highland Park students in a series of 30-minute classes. He says the school’s diversity comes across in the art his students create. For example, the school has a large international student population “who bring a lot of diversity to their artwork from their culture influences.”

Mr. Bucolo believes that Healthy NewsWorks is an important addition to Highland Park’s curriculum. For example, students making a poster about dental health would do a little research so their illustration would be different from what everyone else had.

“They would go home, get a little more knowledgeable on the subject, and I have to believe that that affected their personal health, their hygiene,” he said.