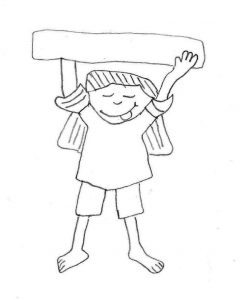 March 2017… Second, third, and fourth graders were surveyed about their favorite exercises that can help strengthen bones for the latest edition of the Whitehall Healthy Reporter published by Whitehall Elementary School in the Norristown Area School District.

The results were published in the Winter 2017 issue, which carried the distinction of being the 400th health newspaper published in more than 30 schools since the Healthy NewsWorks program began in 2003.

Whitehall has been part of the Healthy NewsWorks program for nine of the past 11 school years. This year’s reporting staff consists of nine fourth grade students who are supervised by Ms. Tami Peterson, the Whitehall school librarian. Ms. Peterson uses the newspaper to teach students about media.

“The students worked extremely hard and diligently to make sure it was our finest paper yet,” said Ms. Peterson. “We made sure we had an illustration to go with each article.”

In addition to the bone health survey, the edition featured several other topics of interest, including a comparison of the taste and nutritional merits of chocolate milk versus sports drinks.

“The paper also has created a sense of ownership for the children,” Ms. Peterson said. “They have taken a vested interest in their health.”

As a librarian, Ms. Peterson also appreciates the lessons she can teach about media through the newspaper—finding reliable resources, how to tell whether a person is an expert, whether information is current. “We fact-check,” she said. “We cross-reference to make sure we are providing accurate information.”

Ms. Peterson also has seen the newspaper affect student attitudes toward health over the years. “It’s not that difficult to include healthy decisions in your everyday life,” she said. “It could be something as simple as jumping rope outside, to playing tag outside, to just making healthier food choices.”