First interview is with The Mayor
November 13, 2016 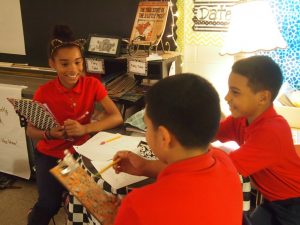 The Fit Flyer reporters scrambled when they heard the mayor was coming to their school.

November 2016… In the news business, reporters are often thrown into reporting situations without much notice.

The staff of the Fit Flyer newspaper at William Cramp Elementary School got a taste of that experience one recent day when they learned Philadelphia Mayor Jim Kenney would be available the same day for an impromptu press conference at their school.

The fifth graders, all new to the program this year, scrambled to get ready for what was their first major interview. They designated four reporters to lead the press conference while the rest of the staff feverishly took notes. The staff’s story will appear in the fall issue of the Fit Flyer.

Afterwards, Mayor Kenney tweeted that the students asked how his administration helps people live healthy lives, and he described the work the public health, parks and recreation, and water departments do for the city.

Two of the reporters wrote reflections about the experience:

“When I heard Mayor Kenney was coming to our school, and knowing that I was going to interview him, I felt like I was going to mess up the question or say my name wrong. I was really nervous. I mean, he is The Mayor.

“I was also nervous because a lot of people came in with him and they all looked important. But I think I did well and the Mayor looked happy. I feel proud that I was able to ask him the questions without looking freaked out.”

“Our interview with Mayor Kenney was really nice. He said my class ‘looks like a living room.’ That was surprising because most people don’t get surprised like that.

“Mayor Kenney wants us to have stuff we need for school like the right clothes for the right seasons. He comes to schools so we will get the supplies we need.

William Cramp is in its third year with the Healthy NewsWorks program.