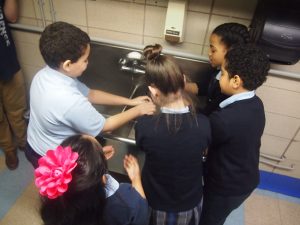 The peer-to-peer videos focus on the Ebola virus and handwashing, and were shown to about 100 primary school students and more than 30 teachers in Sierra Leone as part of a healthy water project spearheaded by KidsGive. KidsGive is a scholarship program sponsored by students at Lawrence University in Appleton, Wisconsin.

Reporters from the St. Martin de Porres Healthy Saint and the St. Veronica Healthy Hero, two of the health-focused newspapers produced through the Healthy NewsWorks program, worked with KidsGive college students to create the videos this past winter.

KidsGive spearheaded efforts to help build a new well and water system at Conforti Primary School in Calaba Town, Freetown. The project will bring running water to the school for the first time. The videos teach that handwashing can reduce the risk of spreading diseases such as Ebola.

Professor Claudena Skran, KidsGive founder, took a group of her Lawrence students to Sierra Leone in March to volunteer in several schools that the club supports. They also showed the videos and gave a handwashing demonstration to the elementary school students at their outdoor washing tank. 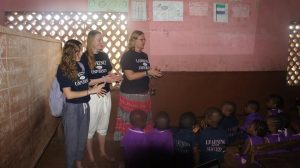 Professor Skran said she plans to return to Conforti school in December when the new water well will be dedicated. At that time, the entire school of about 600 students and teachers will watch the Philadelphia-produced videos.

KidsGive also previewed the videos for teachers at two additional schools in Sierra Leone and will show it to their students in December. 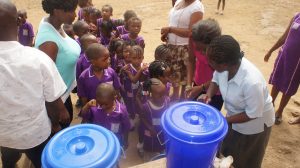 Students in Sierra Leone practice handwashing after watching the video.

“I’ve worked in quite a lot of classrooms, and I was very impressed by the professionalism, seriousness, and cooperation of the Healthy NewsWorks student journalists,” said Professor Skran. “They worked very easily with the camera, were task-oriented, and had rehearsed all of their lines. I was also impressed with their desire to send a message, and their sense that they could really make a difference in Sierra Leone. That was very touching.” 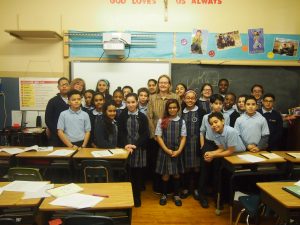 Prof. Skran with St. Veronica reporters after one of her press conference.

“The questions the students asked were pointed and on-target—better than what many adults would ask!” Professor Skran said.

The press conference was “eye-opening” for the reporters, said Maria Dana, a language arts teacher at St. Martin de Porres, who oversees the Healthy Saint.

“As eighth graders, the Healthy Saint reporters really enjoyed collaborating with the Lawrence students, who, by their example, showed them the usefulness of applying what they learn to solving a real-world problem,” she said.  “They experienced the importance of teamwork in becoming responsible global citizens.”

Diane Muller, a language arts teacher at St. Veronica and head of the Healthy Hero, said Professor Skran helped her reporters understand that basic human needs such as water and healthcare aren’t readily available to everyone. The reporters also learned “that their ideas and their work is important,” Mrs. Muller said. “They can be a part of helping others around the world.”


Back to School & Community News