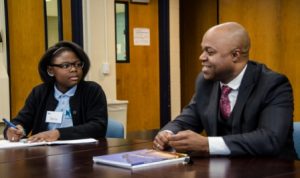 Frederic Bertley of The Franklin Institute is interviewed by one of the Hope Partnership for Education reporters for our 2016 book.

April 2016… The guest and his interviewers sat around a large wood conference table, he in a three-piece suit, the team of journalists in their school uniforms of polo shirts and khaki pants. With one against six, it could have turned into a messy media showdown—except that these young journalists’ sole mission was to learn as much as they could about health from their guest, Frederic Bertley, senior vice president of science and education for The Franklin Institute.

Dr. Bertley recently was interviewed by Xaria Burgess, Shyann Davis, Zahir Farlow, Diwud Morrow, Kenyetta Powell, and Nakeya Williams—student staff members of the Healthy Hope newspaper at Hope Partnership for Education in North Philadelphia. Their story about Dr. Bertley will appear in the upcoming book, Leading Healthy Change In Our Communities 2016, to be published in May.

During the interview at Hope, the sixth, seventh, and eighth graders, who spent six lunch hours preparing for the interview, asked Dr. Bertley questions ranging from good eating habits, to his job, to advice for a successful life.

“What do you do to eat healthy?” said Diwud.

“What should I do, or do I do?” Dr. Bertley said with a laugh. “I try to eat healthy.” He also regularly exercises, drinks a lot of water, and takes time to unwind after stressful situations, he said. Dr. Bertley quickly pivoted to make a point about how the healthiest food is natural.

What’s in an apple, he asked. They answered with the obvious ingredient: “apple.” And what’s in a Big Mac? Aside from meat of some kind, the kids couldn’t say.

“Don’t give up on your dreams. … You can do whatever you like,” he said. “Study things you enjoy.”

After the interview, the Healthy Hope journalists contemplated the story they would write about the interview.

One of the key points, Nakeya said, would be: “It’s important to learn about health. The healthier you are, the longer you live.” Added Zahir: “Stay healthy.”

Xaria offered, “Keep your head up and keep moving forward.”