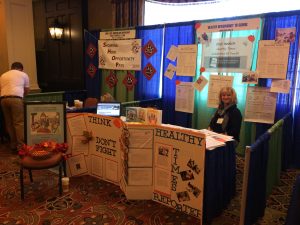 December 2015…Ambar Torres Ramirez and Eddie Fisher are making their world healthier, one story at a time. They are among the current staff of students at Cole Manor Elementary School in Norristown who produce the Healthy Comet newspaper, which this year is celebrating its 10th anniversary.

“The kids who participate in it really are getting an invaluable experience,” said Cole Manor Principal Nicole Poncheri, Ed.D. “We’ve covered a lot of things, interviewed a lot of wonderful people.”

After meeting journalist and Healthy NewsWorks cofounder Marian Uhlman, Dr. Poncheri became intrigued with the opportunities that a student newspaper focused on health could bring to children at the kindergarten through fourth grade school. She liked that it would build on health lessons and that writing stories would allow third and fourth grade students to apply skills they had learned in other classes in the “real-life setting” of newspaper publishing.

A decade later, the Healthy Comet has become an admired part of the school. Newspaper pages are enlarged and hung in hallways. Student journalists are ambassadors who go into classes to talk about health topics. Dr. Poncheri and teacher Natalie Shuler, the newspaper’s editor-in-chief, even helped develop a classroom guide for how teachers in any school that participates in the Healthy NewsWorks program can integrate their own newspaper into classrooms.

The Pennsylvania School Board Association recently featured The Healthy Comet at its PSBA Excellence Fair in Hershey, Pa.

The Healthy Comet has evolved, covering a broad range of topics, spanning from physical health to social and emotional health. Cole Manor students also have interviewed a community health leader for each of the Healthy NewsWorks books, Leading Healthy Change In Our Communities. Among the leaders were Liz Scott, mother of Alex Scott, the young cancer patient whose lemonade stand lives on as a foundation helping to fund research into pediatric cancer.

It’s no wonder that classmates see the student journalists as local celebrities.

Eddie, a 9-year-old fourth grader, is in his second year of working on the newspaper. The importance of maintaining dental health and having a diet that is chockablock with fibers—especially fruit and vegetables, he explains—are among the topics he has written about for the newspaper.

Ten-year-old Ambar is in fourth grade and her second year of reporting for the Healthy Comet. She also enjoys the extras that come with participation.

“Sometimes we get to go on field trips and experience new stuff,” Ambar said. One of those trips was to Quest Diagnostics in Horsham where company employees set up simulated lab stations to introduce topics such as microbiology, hematology, and pathology.

These days, Ambar is working on a story about gaga ball pits, where children play gaga ball—a gentler version of dodgeball.

What will happen in the next 10 years?

Ambar and Eddie think the Healthy Comet will be alive and healthy. So does Dr. Poncheri, who is thinking about holding a 10th anniversary celebration for the publication.

“I would love to expand it even further,” she said. “It opens the students’ eyes to a lot of wonderful things.”