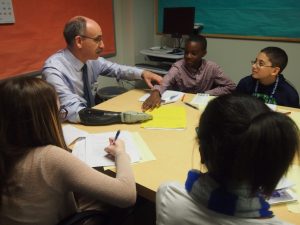 Ten reporters from East Norriton Middle School peppered Dr. Alberto Esquenazi, chairman of Einstein Healthcare Network’s Department of Physical Medicine and Rehabilitation and chief medical officer for MossRehab, for nearly an hour as he described his work as a physical medicine and rehabilitation specialist. Five of the reporters will write a chapter for the new book, and the others will help write an article for the school’s health-focused newspaper, the Bulldog Bulletin.

Dr. Esquenazi, who lost an arm in a lab accident when he was a medical student, spoke with the reporters about a device he helped develop to enable people with lower limb disabilities to stand and walk. He also showed the students his artificial hand and explained how it worked.

“Dr. Esquenazi had a huge impact on the students who interviewed him for the book project,” said Vicki Strickland, an East Norriton teacher and faculty advisor for the Bulldog Bulletin. “His personal story of overcoming the adversity of losing a hand but still continuing on with his medical career, along with keeping a positive attitude, really resonated with students. Many of the young journalists are still talking about how much they admire Dr. Esquenazi.

“Students also really appreciated and were fascinated with the stories he shared of his actual experiences with helping patients,” she said.

Dr. Esquenazi is one of a dozen Philadelphia-area health leaders who will be interviewed for the book, due for publication in May 2016. His visit to East Norriton also drew coverage from The Times Herald newspaper of Norristown.

The Leading Healthy Change series began in 2012 and has become one of the signature projects of the Healthy NewsWorks student media program each year. To read past editions and learn more, visit our about the book project page.

The Bulldog Bulletin is in its seventh year at East Norriton in the Norristown Area School District. Staff members are in fifth through seventh grades.