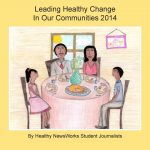 March 2014…A top chef, a swim coach, and a physical therapist who works with a facility dog are among the subjects of a new book written and illustrated by students participating in the Healthy NewsWorks student media program.

All told, 14 individuals and Seamus the facility dog, will appear in Leading Healthy Change In Our Communities 2014, which will be published this spring and is the third in a series focused on community leaders who work to enhance health and wellness for children and their families.

More than 70 elementary and middle school students in Healthy NewsWorks schools have contributed to this year’s volume. As did the previous book, the 2014 edition will include a companion teacher guide to encourage classroom discussions and activities.

“It’s an exciting and powerful feeling for these 8- to 13-year-old students to be able to ask good questions about health and safety and to communicate the answers to their peers,”said Marian Uhlman, director of Healthy NewsWorks.

Here is the complete list of 2014 health leaders selected from nominations received:

Healthy NewsWorks will celebrate the students’ work with a book-signing event on Tuesday, May 20, from 5:30-7:30 p.m., at the Merion Tribute House in Merion Station, Pa.