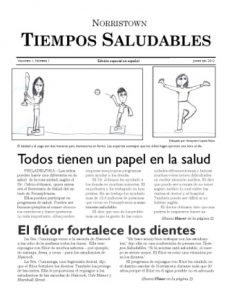 “There is a large number of Spanish readers in the Norristown community, so it was important to translate the articles so that those readers could have access to the healthy living articles,” said Ms. Katie Sortino, a Gotwals third grade teacher who also oversees the school’s Healthy Press newspaper and the Spanish translation project.

One student agreed. “It is important for us to help other families have a chance to learn about what is going on at Gotwals and about being healthy,” the student said.

Translating the articles also allowed the students to improve their literacy not only in English but also in their home language. “We all know how to speak Spanish, but we do not know how to read it or write it all that well,” said one student. “So it was cool to learn how to do this. We liked working as part of a group because if one of us didn’t know a word or phrase we could support or help each other.”