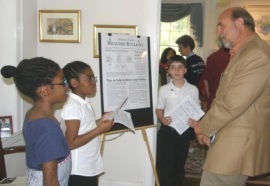 May 2011…More than 120 people gathered May 21, 2011, in Haverford, Pa., to “get the scoop” on the Healthy NewsWorks student media program. The fundraising event featured remarks by Joseph A. Frick, former president and CEO of Independence Blue Cross, and awards to student ambassadors of the program’s health-focused newspapers.

Students from many of the 12 schools currently involved in the program showed samples of their work and explained to attendees their roles in researching, writing and illustrating health topics and producing newspapers that are shared with their schools and families.

In his remarks, Mr. Frick described a visit he had made to a Healthy Bulletin newspaper staff meeting at Marshall Street Elementary School in Norristown and spoke of how important it is to get the message early in life of taking care of oneself. He also recounted his personal health journey and told the audience his first meeting every day now is with his treadmill.

“Meeting the kids and seeing their excitement about Healthy NewsWorks was totally inspiring,” said Dr. Walter Tsou, past president of the American Public Health Association. “It was great to see the support across the entire community.”

Nancy Erickson, school nurse and Healthy Hawk advisor at Highland Park Elementary School in Upper Darby, said she enjoyed seeing the students from several schools and witnessing the passion and excitement they showed while talking about their newspapers. “It made me realize how much interest students have in their health and in taking care of the community’s health,” said Mrs. Erickson, who also serves on the Healthy NewsWorks advisory board.

“I think everyone came away with a real appreciation of the powerful effect these young voices are having in influencing health attitudes in their communities,” said Marian Uhlman, director of Healthy NewsWorks. “We are deeply grateful to Joe Frick, to our hosts, Elizabeth and Tony Vale, to the students and their families, and to all who attended and made contributions.”